Stage 4: Changing Lanes on the Highway

Recognize the speed differences between lanes

Changing lanes on the highway can be particularly challenging due to the high speeds as well as the relative difference in speeds between lanes. For instance, the traffic on the far left lane may be traveling 75 mph whereas the traffic in the middle lane may be traveling 65mph and the far right lane, 55mph. This is foreign to new drivers who are accustomed to driving on city streets in which all lanes of traffic are traveling at approximately the same speed. 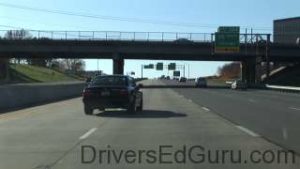 You Must React Quickly

Just as we discussed in the article on merging, gaps in traffic can close quickly on the highway. New drivers are shocked to find that a gap that was open five seconds ago is now occupied by a fast-approaching truck or car. That’s why changing lanes on the highway requires several steps:

Should My Teen Accelerate When They Move Into a New Lane?

There are certain incontrovertible rules in driving such as “Do not go on Red”. There are a lot of people who believe, with a fierce tenacity, that you should always accelerate when changing lanes on the highway. Who came up with this? You should base the speed at which you change lanes upon the traffic conditions!

Talk Your Teen Through the Lane Change

With most new tasks on the highway, you need to talk your teen through the decision-making process of changing lanes. For the first several lane changes, you should double-check all of their mirrors to make sure that the lane they’re moving into is indeed clear.

Continue on to Passing on a Divided Highway