I don’t want to get off on a rant here, but I find it so frustrating that our driver licensing system puts a huge emphasis on parallel parking, but ignores so many other important skills. Now, I understand the reasons (although it doesn’t excuse the system’s ineptitude) why the behind-the-wheel test doesn’t include highway driving. It has to do with safety and funding. However, I find it inexcusable that the behind-the-wheel test doesn’t cover two-point, three-point, and u-turns. These maneuvers are tricky, yet they are a necessity for every driver. Parallel parking, on the other hand, while important, isn’t a skill that every single driver uses. There are many drivers who will go years without needing to parallel park.

I apologize for going off on a tangent there. The point is that being able to reverse your driving direction is darned important. There are 3 ways to do this: two-point, three-point, and u-turns. 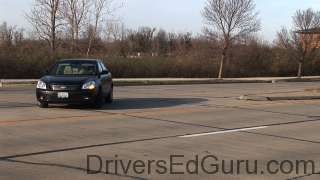 When practicing u-turns with your teen, the most important task is to determine whether or not it’s legal to make the turn. Your job is to show your teen where to look for the no u-turn sign. As long as there isn’t a sign, you can safely assume that performing a u-turn is an acceptable action…sort of.

Just because there’s isn’t a “No U-Turn Sign”, it doesn’t mean it’s safe

We’ve all witnessed the driver who attempts to make a u-turn and half-way through the turn realizes that they’re not going to make it. If they continued forward, they’d end up hitting the curb of the new road. So, what do they do? They reverse in the middle of traffic which is essentially performing a 3-point turn.

It’s difficult for most cars to perform a u-turn unless they’re turning into a road with two lanes. Performing a 180-degree turn within the width of one lane is impossible…unless you’re driving a bicycle.

To avoid this type of disaster and successfully complete a U-Turn, follow these steps:

What exactly is a “point”?

I get this question fairly often. A “point”, in the context of two-point and three-point turns, is defined as a spot where your vehicle stops and subsequently initiates a turn.

So, during a two-point turn, your vehicle will come to rest twice before the turn is completed. In a three-point turn, it will stop a total of three times before you finish the turn. Therefore, a u-turn would be defined as a zero-point turn.

In Stage 2, you practiced <changing directions by reversing on a street>. This included two variations of two-point turns. So, your teen should have some experience with this maneuver.