Location: Everywhere except the highway (save that for Stage 4)
Length of Lesson: 15-20 minutes

You should always keep a minimum of a 3 second interval between you and the car immediately in front of you. This is usually referred to as the “3 second rule”. To learn more about this rule and why it is important, read our following distance article. 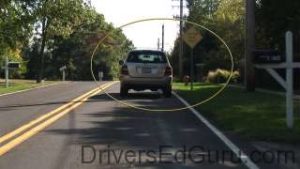 At first, it may be difficult for your teen to focus on both a fixed object and the car in front of them in order to calculate their following distance.

If this is the case, start by simply asking them to count the number of seconds until they reach a fixed object that you determine. At this point, you’re not concerned with the car ahead. For instance, you would ask them to count until your car reaches the next intersection. Have them count out-loud by saying, “one one thousand, two one thousand, three one thousand…”.

Once they get the hang of counting (which shouldn’t take long), ask them to try to guess the number of seconds until they reach fixed objects.

For example, “Son, how many seconds until we reach that exit sign?” They should make their immediate guess while you count. Once they demonstrate success, move on to having them calculate their following distance.

Ask your teen to create a 3 second following distance between their car and the car ahead of them. Once they’ve created what they think is the appropriate distance, test it. As soon as the car ahead passes a fixed object or landmark, start counting out loud. Once your car passes that same object, stop counting. You should have counted to three seconds (or higher, which would be great).

It is up to you as the parent to drill into your child’s brain the importance of a proper following distance. If you’re following a car too closely, you simply don’t have the time to stop in the case of an emergency.

Just because other cars tailgate, it doesn’t mean that it’s safe (or not annoying). Remind your teen that a 2 second gap versus a 4 second gap can mean the difference between life and death. There’s no reason to follow closely because it doesn’t help you get to your destination any faster. Why on earth would you risk your life over three lousy seconds?

Continue on to Two-Point, Three-Point, and U-Turns – Part 1