Stage 1: Yes, you must remind them to wear a seat belt. 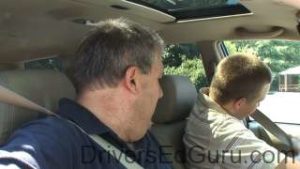 We all know that seat belts save lives. Yet, inexplicably, teens still drive and ride in cars without wearing their seatbelt.

Whatever it takes to convince your teen to wear their seatbelt, do it. If you need the staggering stats, we’ve listed them below.

If you need to make failing to wear their seatbelt a lose-your-driving-privleges offense, do it.

While we’re not big fans of the because-I-said-so school of parenting, we feel that when seat belts are concerned, you must have a take-no-prisoners attitude.

The video below illustrates why wearing a seat belt can save your life in the event of a crash.

These statistics are courtesy of the NHTSA (National Highway Traffic Safety Administration).

OK, so it’s pretty clear that seat belts save lives. This message has been repeated ad infinitum, so it’s easy for parents to believe that this issue has been covered. And for most adults, the message has resulted in increased seatbelt use. But, for teens, the message still isn’t clear. Here are the facts to prove it:

So, why aren’t teens wearing their seatbelt?

Strikingly, the percentage of teens who say that they “rarely or never wear safety belts” ranges from 8 to 27 percent, depending upon the State. The percentage is even higher for teens who admit not having worn their seat belt within the past week.

Here’s what teens are saying:

Here are the theories from the experts:

How do you convince teens to wear seat belts?

Set a proper example by always wearing your seatbelt and insisting that everyone who rides in the car with you do the same. Don’t start driving until everyone is buckled up.

Studies show that when an adult is buckled, a toddler is also restrained 86% of the time. When the parents don’t wear a belt, toddlers are only restrained 24% of the time. Clearly, you play a crucial role in teaching your kids to wear seat belts.

Continue on to The Pivot Method